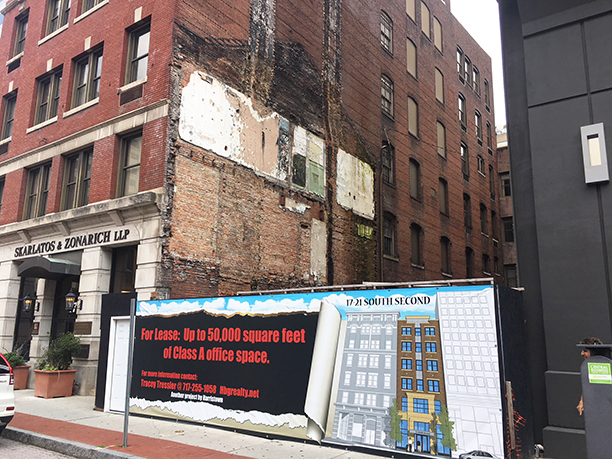 A new downtown Harrisburg office building is a bit closer to reality today, as the 2nd Street project has received a $1 million state grant.

The money will go towards constructing a new, six-story office building at 21 S. 2nd Street, with retail on the ground floor, along with the rehabilitation of the historic, six-story structure next door at 17 S. 2nd St., which houses the SkarlatosZonarich law firm. The two buildings then would be joined inside to form a single, interconnected structure (artist’s rendering below).

“I am proud to support the construction of this new office and retail tower in downtown Harrisburg,” Wolf said in a statement. “This investment supports the efforts of the region to create more jobs, bolster shopping and retail opportunities, and will strengthen the city’s tax base and local economy.”

Last year, Harristown Development bought and then razed the dilapidated, three-story, 19th-century structure that once housed the Coronet Restaurant. The building had been empty since a fire destroyed the restaurant several decades ago.

Harristown had requested $3 million for the building project. Most RACP applicants are denied funding and, when granted, awards typically are significantly lower than amounts requested.

So far, in the 2018 round of funding, the only other RACP award in Dauphin County has gone to the city of Harrisburg, a $2 million grant to begin the Paxton Creek reclamation project. In 2017, the Harrisburg Midtown Arts Center (HMAC) received $1 million to complete its build out, the Salvation Army Harrisburg received $500,000 for its new building on Rudy Road and Hershey Towne Square received $750,000 towards a three-story parking garage.

Brad Jones, the CEO of Harristown Development, could not be reached immediately for comment.